Raleigh, North Carolina, has a Caribbean Festival, CaribMask, which is going on its 7th year!
The festival celebrates the Caribbean culture through food, dance, music, art, and many more. This year the festival started on August 22, 2018, and ended on August 26, 2018. However, I only attended the Saturday portion of the event, which involved the Parade of Bands and Village Festival. Several food vendors and pop-up shops took over Fayetteville street in Downtown Raleigh!
I had no idea the CaribMask festival was going on at all. It was just my lucky day off when I googled events in Raleigh for the weekend, and the time of the parade appeared on the list of events. I became excited and eager to attend the parade because I experienced the 2017 Caribana Fest in Toronto, Canada.
The Caribbean Festival originated as the Trinidad and Tobago Carnival; it would occur on Monday and Wednesday before Ash Wednesday. The Caribbean festival is a celebration of several different traditions throughout each Caribbean culture. Over the years, the festival has become a popular celebration in large cities such as Raleigh, NC.!
CaribMask is hosted each year by the Raleigh-Durham Afro-Caribbean Association (RDACA). Their mission, according to their Facebook page, is to promote diversity and equality. They aim to create a deeper appreciation of Caribbean culture through integration, creation, and support of community activities like the CaribMask Caribbean Carnival.
Raleigh is a vibrant and multicultural city. People represented several Caribbean areas: Jamaica, Trinidad, Africa, Colombia, Brazil, Barbados, Haiti, Bahamas, Belize, Panama, Guyana, St Lucia, and Raleigh, NC.
The parade started at 11 am, but I got there fifteen minutes late, so I could not get a good view. Each side of Fayetteville Street was crowded with people eager to see the parade as much as I was. I found a spot on the left side of the street, where I stood on the base of a tree bed next to a gentleman who seemed to be alone as well. Even though I stood on a raised tree bed, I struggled with having a good view of what was happening, but the music kept me entertained!
Once the parade was over, I immediately started looking for Jerk Chicken with red beans and rice. I tried the dish for the first time during my Jamaica trip in 2016, and I loved it! All of the food lines were extremely long; I stood in line for over 1 hour and 30 minutes. The sun was scorching while I waited, and I debated if it was worth it. The longer I stood in line, the more I told myself I might as well stick it out because I’d been standing for such a long time already anyway! I will say the wait was worth it!
I hope to experience more of the festival in 2019, but in the meantime, enjoy my photos! 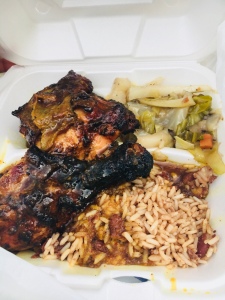 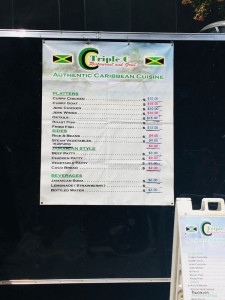 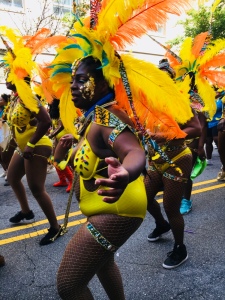 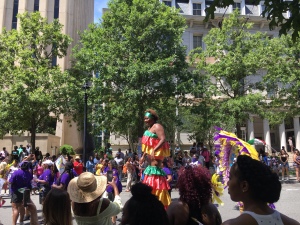 Qualatrice and I Journi 2, All Rights Reserved